Here’s a one-minute video that reinforces a point I make in Chapter 2. Enjoy and learn.

This public service announcement by the Mayor of London offers an elegant metaphor on today’s political economy. Most people think they see everything that goes on directly in front of them. This is simply not true. It is easy to not only cloud people’s thinking, but also misdirect their visual perceptions. Magicians, movie makers and Madison Avenue pitchmen do it all the time. We shouldn’t be surprised that propagandists and politicians use the same tactics.

PS: How many plays before you saw the moon-walking bear? 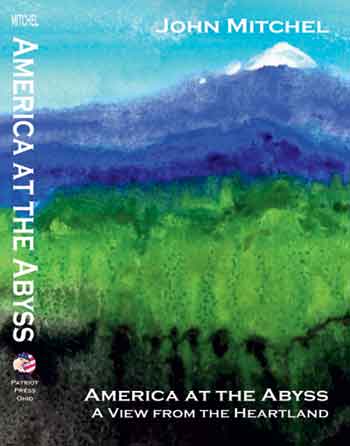 A “must read” that defines power politics in America and its disregard for the Founders’ vision.
A conservative Republican’s response to Zell Miller’s “A National Party No more, the Conscience of a Conservative Democrat.”
Chilling saga of partisan politics run amuck.
Riveting, provocative wake-up call for the GOP.
Exposes the total breakdown of due process and the rule of law.
With breathtaking detail, documents wholesale abuse by federal and Ohio election officials.
Offers a prescription for Americans to take their country back.

Preview of “America At The Abyss”:

Even before I challenged Bob Taft for Ohio Governor in 1998, I often wondered how men of relatively modest means spend their career as elected officials in local, state and federal government and come out the other side as multi-millionaires. Just like you and I, career politicians like 9-term Congressman Dave Hobson pay for their children’s educations, pay taxes, save for retirement, pay medical bills, and incur other enormous expenses necessary to raise a family. And yet, if we examined Mr. Hobson’s mandatory Financial Disclosure Statements, we could estimate that since he was a state senator and congressman he accumulated a personal net worth of between 10 and 20 million dollars. Federal election law requires Dave Hobson disclose personal financial assets and outside income, but for good reason, Hobson’s Congressional colleagues made sure the laws they passed on personal financial disclosure don’t require specifics, as that may provide clues to track down illegal activity, if in fact it occurred. In any case, although America at the Abyss goes a long way to explain how your congressman can amass a fortune on the relatively modest salary of a public servant, you may be interested in a Congressional perk that came to my attention after we went to press.
As you know, family vacations can be a very expensive proposition, but I didn’t know how expensive until I researched the Ripon Society. The Ripon Society, a moderately conservative think tank in Wisconsin has spent hundreds of thousands of dollars sending our elected officials on world junkets. They have been especially generous to Ohio Congressmen John Boehner, Mike Oxley (retired in 2006), Bob Ney (served time in federal prison), and Dave Hobson, now retired from Congress. In January, 2005, the Ripon Society provided an all-expense-paid trip for Mr. Hobson to Key Biscayne, Florida costing $2537. Seems like a lot for a four-day trip, but it did provide Congressman Hobson a respite from one of those harsh Ohio winters. Sure, these trips are always advertised as some sort of “legislative conference,” but it’s likely most of the time was spent on golf, pool time and other extracurricular activities that had nothing to do with formulating sound public policy or balancing the budget.
Even more interesting are Congressman and Mrs. Hobson’s junkets to Edinburgh, Scotland in 2001 and Budapest, Hungary in 2004. The Ripon Society paid $19,572 for the Edinburgh trip, and $15,226 to send the Hobson’s to Budapest. That’s an average of more than $2000 per day for two people. You may have taken your entire family on week-long vacations that cost much less than one day’s expense incurred by Mr. and Mrs. Hobson, but paid for by the Ripon Society. Congressman Hobson and his public relations staff seem to be very successful at getting their press releases published, especially right before elections, but I’m sure this story was one they preferred to keep in the shadows.
Expensive, tax-free travel paid for by special interests is one of the many perks that allow our elected officials to amass huge fortunes during a career as a public servant on a public servant’s salary. Of course this is legal activity because the U.S. Congress made it so. But I believe it’s wrong as it opens the door wide for pay-to-play politics and influence peddling. As you will learn when you read America at the Abyss, lavish vacations for elected officials paid for by special interests are not the only activity that subsidizes career politicians’ kingly life styles, and what’s even worse, special interest cash doesn’t always foot the bill; it’s often the taxpayers with no knowledge of doing so.
John R. Mitchel, Author, America at the Abyss: A View from the Heartland
Founder, Ohio Citizens Grand Jury, a subsidiary of John Mitchel Analytics, LLC.
*****
“Let me give you a word of the philosophy of reform. The whole history of the progress of human liberty shows that all concessions yet made to her august claims, have been born of earnest struggle. The conflict has been exciting, agitating, all-absorbing, and for the time being, putting all other tumults to silence. It must do this, or it does nothing. If there is no struggle, there is no progress. Those who profess to favor freedom and yet depreciate agitation, are men who want crops without plowing up the ground; they want rain without thunder and lightning. They want the ocean without the awful roar of its many waters.
This struggle may be a moral one, or it may be a physical one, and it may be both moral and physical, but it must be a struggle. Power concedes nothing without a demand. It never did and it never will. Find out just what any people will quietly submit to and you have found out the exact measure of injustice and wrong which will be imposed upon them, and these will continue till they are resisted with either words or blows, or both. The limits of tyrants are prescribed by the endurance of those they oppress”
Frederick Douglass, New York, August 3, 1857