The art of political class misdirection

Over the years our local, state and federal governments have grown more and more intrusive in micro-managing everything from education to the economy to national defense.  The federal government is bad enough at misallocating national defense dollars, especially with intervention by congress, but even local and state governments can’t help themselves by throwing taxpayer dollars away to influence national defense spending which never was and never will be in their job jar.  Non-federal governments not only spend billions on lobbying for defense dollars, they are willing to divert scarce resources from legitimate national security requirements to the political class, undermining economic and national security in the process.  The 2003 BRAC Initiative Agreement between Greene County Commissioners and the Dayton Development Coalition (DDC) provides us with the perfect example. In 2009 the Greene County Common Pleas Court dismissed Case No. 2009CV0305 on a procedural technicality.  Never mind the compelling evidence supporting bid-rigging, money laundering, breach of contract, evidence tampering and violation of the Racketeer Influenced Corrupt Organizations (RICO) Act, to name just a few.  Today we’ll offer proof positive that Greene County politicians not only broke the law, they spent $1.9 million that added absolutely no value to the BRAC process, but instead enriched former Congressmen Dave Hobson’s, Steve Austria’s and Mike DeWine’s campaign contributors.  The two attachments to this post reveal Greentree and the DDC will go to any length to divert our attention away from their shamelessness in stealing citizen tax dollars, of course with Greene County politicians acting as co-conspirators. 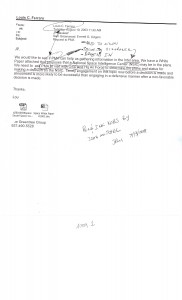 Lou Ferraro, Sam Greenwood and Everett Odgers all worked at The Greentree Group, a “mom and pop” defense contractor that was noncompetitively awarded the $1.9 million BRAC Initiative Agreement. Sam Greenwood and Odgers both sat on the Wright Patt 2010 Committee and Sam was a member of the Advisory Board.  Three generations of Greenwoods donated over $50,000 to Dave Hobson’s, Steve Austria’s and Mike DeWine’s congressional campaigns including $2100 to DeWine from Sam Greenwood’s 15-year-old granddaughter(1).  In 2005, the last full year of the Agreement, JP Nauseef’s salary and benefits exceeded $285,000, nearly double that of the Governor of Ohio and more than the Vice-President of the United States.  Nauseef supervised about two dozen employees at the DDC. The first attachment, a letter from Secretary Rumsfeld to Senator John Warner has absolutely no relevance to base realignment and closure discussions. It is a broad policy statement written more than two years before this email with no reference whatsoever to basing intelligence assets.  Louis Farraro, a retired 2-star general writes that the Space White Paper “proposes that a National Space Intelligence Center (NSIC) may be in the plans.”  The truth is NSIC existed as Foreign Technology Division (FTD) since 1961.  Its name was changed to National Air Intelligence Center in 1993 and National Air and Space Intelligence Center in 2003(2), six months before Farraro proclaimed NSIC “may be in the plans.”  Adding insult to injury, Farraro “would like to see if PMA can help us gathering information in the Intel area,” which probably resulted in the unauthorized release of controlled unclassified information (CUI) to the public.

Briggs Shade, Leo Clark and Brian Morgan were all lobbyists for the PMA Group.  PMA and Greentree ranked one and two in campaign contributions to Dave Hobson over his nine campaigns for congress.  In 2011 PMA’s Founder and President, Paul Magliocchetti was sentenced to 27 months in prison for making illegal campaign contributions to dozens of congressmen including Dave Hobson and Steve Austria.(1) The quid pro quo is crystal clear; Greentree gets handed a no-bid $1.9 million contract, PMA is paid nearly $500,000 by the DDC during the period of performance of the BRAC Initiative Agreement and tens of thousands of dollars in campaign contributions are kicked back to Dave Hobson, Steve Austria and Mike DeWine. A rookie intern could have dug up this information in a few days and yet the Dayton Development Coalition paid Greentree and PMA over a million taxpayer dollars to create the smokescreen that they added value to the BRAC process.  Nothing could be further from reality and it’s long past the time when the citizen class should hold our “public servants” accountable. Sources: